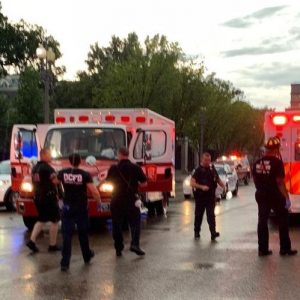 Four people were rushed to the hospital after they were struck by lightning outside the White House in Washington DC.

The victims were two men and two women and they were taken to a nearby hospital following the incident at Lafayette Park.

They are currently in critical condition.

US Secret Service personnel, as well as US Park Police, arrived swiftly on the scene following the lightning strike to administer medical attention to the victims before they were taken to the hospital.

Footage shared across social media showed a large emergency services presence along the main road, which separates the White House from the park.

A tweet from the District of Columbia Fire and EMS Department confirmed they were in the process of treating and transporting four patients, all in critical condition with life threatening injuries.

Saxon is a prolific writer with passion for the unusual. I believe the bizarre world is always exciting so keeping you up to date with such stories is my pleasure
Previous BBC presenter, John Caine who sexually assaulted teen boy after luring him to studios with backstage pass is jailed for eight years
Next Teacher Sentenced to 60 Days for Sexually Abusing Student (Video)