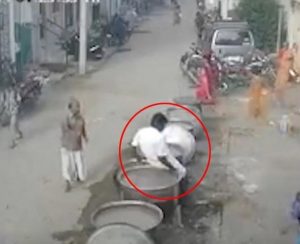 A man has died from horrific burns he sustained after falling into a giant pot of porridge in India.

A graphic video shared online shows the moment the man appeared to stagger and fall into the pot of boiling porridge.

The man, named Muthuswamy, had reportedly been in charge of overseeing the preparation of porridge for an upcoming festival in Tamil Nadu.

The cause of the man’s sudden unsteadiness is not yet known, however, his wife said he suffered from epilepsy, which may have triggered the fall.

Police have since launched an investigation into the tragedy.

Saxon is a prolific writer with passion for the unusual. I believe the bizarre world is always exciting so keeping you up to date with such stories is my pleasure
Previous Couple caught performing oral s3x act in Liverpool street (videos)
Next Lady causes chaos at a funeral by saying the ‘last words of the deceased’ (video)