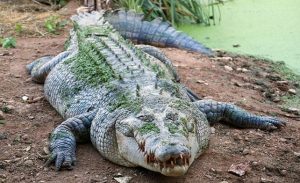 A 30-year-old man was mauled to death by a crocodile and his body was recovered after hours of searching in a river in Gujarat’s Vadodara district, an official from the forest department said on Monday.

A man was pulled into the river by a crocodile and his body kept disappearing and resurfacing in the water while locals shot spine-chilling videos of the attack on their mobile phones, reports NDTV.

“Forest officials were alerted, following which a search operation was launched with the help of the local administration. The victim’s body was recovered around 10 pm,” Mr Rathod said.

The victim was identified as Imran Diwan, a resident of Sokhdaraghu village, he said.

“The man’s body bore bite marks on the shoulders. We are trying to find out how the victim ended up in the river, as locals witnessed the attack only after he was already inside the water,” the official added.

Saxon is a prolific writer with passion for the unusual. I believe the bizarre world is always exciting so keeping you up to date with such stories is my pleasure
Previous A US Mattress Firm Is Looking For Professional Nappers With “Exceptional Sleeping Ability”
Next Girl spotted taking her ‘support alligator’ for a swim and a walk (video)