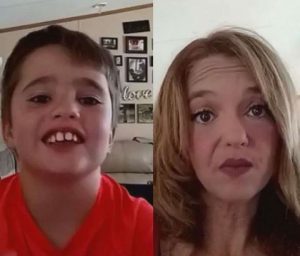 A boy who saved his mother from drowning when she suffered a seizure while swimming has become an internet sensation and is currently being hailed as a hero.

The incident was captured by a home security camera which shows the moment when Gavin Keeney, from Oklahoma, jumped into the family’s pool to save his drowning mother.

His mother, Lori Keeney is epileptic and prone to seizures. 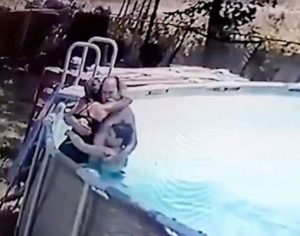 Speaking after the incident, Keeney said she and her son were having a “wonderful morning” when they had decided to jump into the pool for a swim.

“[Gavin] had just gotten out of the pool and I just went into a seizure,” Keeney said. “It scared me more than I’ve ever been scared.”

Gavin, who was on the porch, said he heard splashing and then looked and saw his mother “sinking in the pool.”

He jumped into the pool, carried his mother to the ladder and kept her head above water for more than a minute before his grandfather jumped in to help.

Saxon is a prolific writer with passion for the unusual. I believe the bizarre world is always exciting so keeping you up to date with such stories is my pleasure
Previous Lightning strikes teen in chest on first day of college
Next Pregnant side chick crashes boyfriend’s wedding (video)