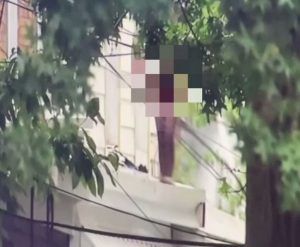 A video has surfaced online showing a naked man who took to a rooftop in Northwest D.C. and began firing shots and exposing himself.

DC police responded to a call for a “man with a gun” but when they arrived on Wednesday afternoon, September 7, it turned into a barricade situation.

When officers arrived, they found the man naked walking from roof to roof at Georgia Avenue near Jefferson Street in the Brightwood Park neighborhood.

He also walked across power lines, which had been shut off by crews to prevent electrocution of the man.

At some point, the man ran back into the house and put on clothes. 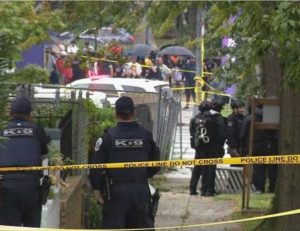 Eye witnesses saw the man break a window of one of the homes, and throwing what appeared to be broken pieces of glass at the officers below.

The owner of that home, who asked to remain anonymous, told 7News she is still processing what happened.

“He picked my house to break into. He came in from the kitchen, and went upstairs and opened the window some kind of way, and got to the roof of my porch. So he’s been jumping up and down, breaking windows,” the homeowner said.

Authorities say it is an adult male experiencing a mental health crisis. By 5 p.m., authorities notified the public that they had recovered a firearm from the scene and that there was no longer an active threat.

Watch the video from the scene below.

A man continues to evade police in NW DC, traversing power lines in the Brightwood Park neighborhood, more than an hour after firing a gun from a nearby rooftop. #FOX5DC pic.twitter.com/hrtDyrcjDX

Saxon is a prolific writer with passion for the unusual. I believe the bizarre world is always exciting so keeping you up to date with such stories is my pleasure
Previous Police apprehend man for allegedly raping 16-year-old girl on a grave in Gombe
Next 16-year-old South African girl jumps from moving vehicle and dies after driver refused to stop