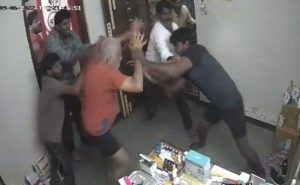 A doctor was beaten by a group of men in Maharashtra’s Baramati on September 6, allegedly because he opened the clinic door late to let them in. The men, reportedly related to a patient, also assaulted the doctor’s son, CCTV footage shows.

The incident, the entirety of which was caught on camera, took place inside Yuvraj Gaikwad’s clinic in Sangavi which is based out of his home.

According to his complaint, Mr Gaikwad was eating dinner with his family when he heard loud knocks on his door. Following a delay in opening the door, the men broke the glass on his window.

When the doctor finally opened the door, Anand alias Anil Jagtap, Vishwajeet Jagtap, Ashok Jagtap, and Bhushan Jagtap barged into his house after a brief exchange at the threshold and began beating him.

In the CCTV footage, one of the men is seen opening a door once inside the clinic and pull Mr Gaikwad’s son out of the room by his shirt and assault him as well. Two women in the next room watch the incident unfold, while one of is seen taking a picture of the men.

Malegaon Police has registered a case against four people for the assault on the doctor and a probe into the complaint is underway.

Saxon is a prolific writer with passion for the unusual. I believe the bizarre world is always exciting so keeping you up to date with such stories is my pleasure
Previous Lioness Gets Caught In Zebra Stampede, you won’t believe what happened next (Viral video)
Next 46-year-old man arrested for allegedly raping his 17-year-old biological daughter