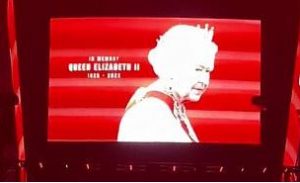 A big-screen tribute to the late Queen Elizabeth II in Las Vegas was met by a loud chorus of boos from fans in attendance at UFC 279 on Sunday morning, September 11

The United Kingdom, and much of the world, has been in mourning following the death of the monarch on Thursday September 9, but there was little love shown to her in Vegas where the sight of her face immediately sparked angry boos and laughter from people listening to the jeers.

Ahead of the main card of UFC 279, a picture of the Queen was put up on the main screen inside the arena, with her date of birth and death below, while an announcer read her name out to the crowd in attendance.

Queen Elizabeth died at the age of 96 on Thursday, and has now been succeeded by her son, King Charles III.

Saxon is a prolific writer with passion for the unusual. I believe the bizarre world is always exciting so keeping you up to date with such stories is my pleasure
Previous 46-year-old man arrested for allegedly raping his 17-year-old biological daughter
Next Canadian news anchor shares viral video of her swallowing fly during live broadcast