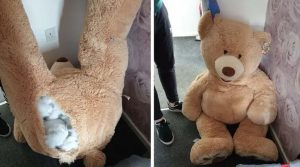 A teenager in the United Kingdom wanted on allegation of stealing a car was caught hiding from police in a giant stuffed teddy bear, police revealed Wednesday.

Joshua Dobson, 18, was arrested last month near Manchester on charges of motor vehicle theft, driving while disqualified, and leaving a gas station without paying, police said.

Police searched for Dobson at a home in Rochdale where they found him hiding in a “bear-y” peculiar place.

“When we went to arrest him, our officers noticed a large bear breathing in the address before finding Dobson inside,” police said.

Dobson was officially sentenced last week on the charges and will spend nine months in prison, Rochdale authorities said.

The department quipped: “Hopefully he has a bearable time inside.”

Saxon is a prolific writer with passion for the unusual. I believe the bizarre world is always exciting so keeping you up to date with such stories is my pleasure
Previous Viral Video: 3-legged alligator in Florida unexpectedly goes viral on TikTok
Next Texas man gets 60 years for filming himself raping child