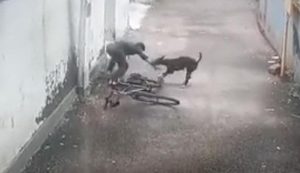 A boy on a bicycle was attacked by a stray dog in a village in Kerala’s Kozhikode, India.

The clip is now viral on social media.

Posted on Reddit under r/kerala, the 51-second video shows the boy entering a lane on a bicycle when the dog attacked him. The footage has been recorded by CCTV installed in the village. According to local publications, the boy studies in Class 7 and the incident took place on Sunday afternoon. This comes amid spike in number of dog bite cases across the country.

The clip shows the boy stopping his bicycle close to a home. Other children too come out to greet him. Suddenly, a black-coloured stray dog comes out of nowhere and pounces on the boy and bites him on the hand.

Shocked, the boy falls to the ground and the dog keeps growling with its jaw firmly on the boy’s hand. The other scared children rush back inside the home.

The Class 7 boy tries to escape but the dog’s jaw grip proves to be too strong for him. He gets up but falls again. The boy once again gets up and runs inside the house with the dog refusing to let go his arm.

When the boy enters the house, the dog finally lets him go and runs away. A few second later, another dog is seen crossing the house, followed by a few concerned locals who enter the house to check on the boy.

Saxon is a prolific writer with passion for the unusual. I believe the bizarre world is always exciting so keeping you up to date with such stories is my pleasure
Previous Terrifying Video Shows Snake Stuck In Woman’s Ear
Next Protesters heard booing King Charles as they call for monarchy to be abolished