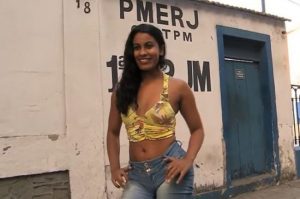 Shots from the clip show adult movie star – known as Patricia Alves, or Patty UPP – draped across the back seat of a police car in a state of undress.

The compromising footage of the came to light after the ex-girlfriend of one of the officers involved discovered a clip on his phone late last month. 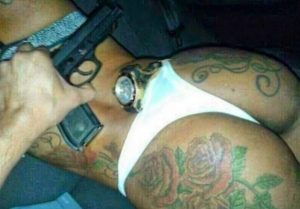 In the video Alves can be seen posing semi-nude with a gun and an expensive watch resting on her body, and what looks like a police shirt badge can be seen beside her.

In the photos and video produced by the military itself, the uniformed agents appear having sex with the woman.

In some images Alves can be seen clad in just panties and bra with guns on her belly. Another photo shows her wearing a shirt similar to the one police officers wear under their uniform.

Alves reportedly had sex with two unnamed officers while they were on duty with the Police Pacification Unit (UPP) in Lins de Vasconcelos, Rio de Janeiro in Brazil. 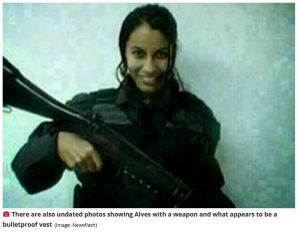 The police officer’s furious ex-girlfriend local media: “They sent the Uber, as they always do, and she went there.

“They had sex in the accommodation, on the premises of the UPP and inside the Hilux.” 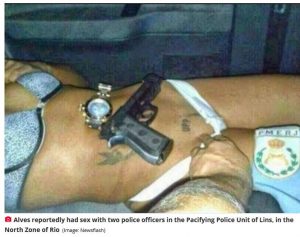 This led to the arrest of four MP officers who were imprisoned for 30 days in 2015.

The images are currently being analysed by the MP’s Judicial Administrative Department (General Corregedoria) while the case is under investigation, according to reports.

The MP added: “It does not condone any misconduct or crimes committed by its members, rigorously punishing those involved when the facts are verified.”

Saxon is a prolific writer with passion for the unusual. I believe the bizarre world is always exciting so keeping you up to date with such stories is my pleasure
Previous Palestinian gay man is found beheaded after ‘he was abducted and taken to West Bank while seeking asylum in Israel’
Next Balenciaga leaves people completely stunned after holding fashion show in giant mud pit