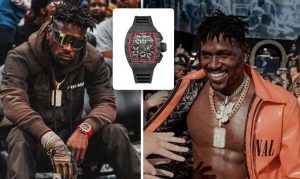 A man named Ryan Kane has filed a lawsuit in Broward County, FL. where Brown resides alleging the former football star ‘knew [it] was a fake but represented [the watch] to be genuine.’

In the lawsuit, filed earlier this week, Kane is suing the ex-Tampa Bay Buccaneers wideout for fraud, among other things. The plaintiff is seeking $160,000 plus interest for his troubles.

Less than two months later, Kane reportedly took the watch for appraisal in Miami, only to learn it was a fake and that Brown had purchased it from Dubai, alongside three other Richard Mille fakes for less than $500 a piece from a dealer.

Brown allegedly told Kane the watch was an RM 011 model worth ‘in excess of $400,000.’ The watch Kane thought he had purchased was released in 2007 in conjunction with Formula 1 driver, Felipe Massa.

The former NFL star is yet to comment on the matter.

Saxon is a prolific writer with passion for the unusual. I believe the bizarre world is always exciting so keeping you up to date with such stories is my pleasure
Previous I just want a child so that I too will be called a mother – Woman who stole baby from hospital begs for forgiveness
Next Drugs gang take over former Arsenal star Jermaine Pennant’s abandoned £3m home and turn it into cannabis factory (photos)