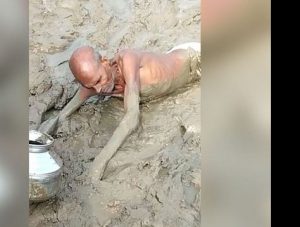 A shocking video of an old man being rescued from the silt of a river in Uttar Pradesh’s Hamirpur has raised questions about access to basic resources like drinking water, for which many still have to risk their lives every day.

In the now viral video clip, an old man can be seen sunk waist deep in quicksand while a man tries to pull him out by asking him to hold on to a wooden stick. A steel pot can be seen next to the old man, with which he had gone to the river to collect water.

Social media users have raised questions over the government’s promise of tap water to every household when such a situation prevails in several areas. A cop can also be seen smiling and recording the rescue effort on his phone, drawing criticism on social media.

Two villagers who went to the banks of the Ken river to fetch water got trapped in a swamp of silt and were rescued by villagers and the local administration.

The viral video is said to be of Bacha Kahani village under the Sisolar police station area of Hamirpur district.

Locals say that the tap water is saline and unfit for drinking, so the villagers are forced to draw water from the river. “We have always gone to the river for fresh water,” the rescued man said in another video.

Another local pointed out that the state’s Jal Shakti minister had visited Hamirpur recently regarding the Namami Gange mission and assured locals that they would receive tap water soon. “Not sure how that is going to materialise,” he said.

Saxon is a prolific writer with passion for the unusual. I believe the bizarre world is always exciting so keeping you up to date with such stories is my pleasure
Previous Viral Video of a Dog Trying To Bite Off Tiger’s Ear Stuns Internet
Next London-Lagos flight delayed as ‘Nigerian deportee smears poo all over plane’, came out from toilet butt-naked