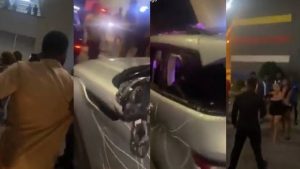 A married man caused a scene at a Lagos Night club when he destroyed a Range Rover he supposedly bought for his side-chick after she allegedly cheated on him.

A video from the incident which happened over the weekend at a popular club in Ikoyi, shows the damaged Range Rover.

The man is seen being restrained by security guards as he rains curses on his alleged sidechick who is also distraught at the state of her car. He can be heard yelling that he bought her the car while calling her a prostitute for cheating on him.

Some passersby can also spotted in the video, calling out the woman for ‘cheating’ while others seemingly blamed the married man for overreacting.

Saxon is a prolific writer with passion for the unusual. I believe the bizarre world is always exciting so keeping you up to date with such stories is my pleasure
Previous Man demolishes houses he built for his wife and her mother after she dumped him for another man (video)
Next ‘Zombie Angelina Jolie’ shows real face for first time after release from jail