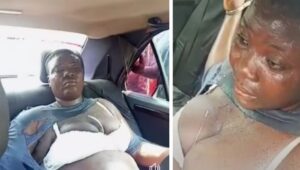 Tragedy struck in Edo State Nigeria after a woman identified simply as Gift allegedly stabbed a man to death following a fight that broke out between the two.

The woman has been apprehended by the police. The incident took place in Egor Local Government Area of Edo State.

In a viral video the woman claimed the deceased identified as Eghosa came to fight her after he saw her with ‘another person.’

“As he see me with another person, he came to fight me for that person house.” she said.

Saxon is a prolific writer with passion for the unusual. I believe the bizarre world is always exciting so keeping you up to date with such stories is my pleasure
Previous US House Speaker Nancy Pelosi’s husband attacked by hammer wielding assailant during home break-in
Next Woman narrates how she and her sisters were raped by their father for years until she had 5 kids for her dad (video)