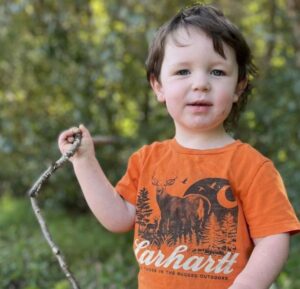 A two-year-old boy accidentally shot and killed himself after finding his dad’s loaded gun in a pick-up truck.

The incident happened when Warren Bennett Oser, from North Carolina, US, climbed into his dad’s vehicle through an open door at their home in Benson and discovered a loaded Smith & Wesson 40-caliber handgun.

According to prosecutors, the weapon was left on the front seat when the two-year-old started to play with the gun. The toddler, whose parents were at home at the time of the shooting, then accidentally shot himself in the head and he was quickly rushed to Johnson Medical Center Clayton.

Warren Bennett Oser, from North Carolina, US, was found by police with a gunshot wound to his head after responding to a shooting on October 15 at around 6pm.

Dad Tyler Oser will be charged with failure to properly and safely secure his firearms to protect minors, the Johnston County District Attorney’s Office confirmed this week.

District Attorney Susan Doyle said in a statement: “My heart goes out to the parents as they grieve the loss of their son.

“This is not about the rightful ownership of guns. This is about the responsibility of gun owners to protect minors by ensuing weapons are kept safely away from children.”

Saxon is a prolific writer with passion for the unusual. I believe the bizarre world is always exciting so keeping you up to date with such stories is my pleasure
Previous Mum falls to death after sneaking to top of waterfall closed off to public for selfie
Next Pennsylvania state representative reelected despite being dead