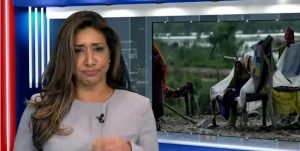 A Canadian news anchor swallowed a fly during a recent TV broadcast, but still continued with her reporting.

Global News anchor Farah Nasser revealed Monday on her Twitter page that the insect had flown into her mouth, and included a now-viral clip of the incident.

“Sharing because we all need a laugh these days. Turns out it’s not just @fordnation, I swallowed a fly on air today,” she wrote, referring to a recent instance in which Ontario Premier Doug Ford swallowed a bee while on camera.

After swallowing the fly, Nasser paused, scrunched her face, gulped and then resumed her news story.

The anchor noted in her social media post that the situation was “Very much a first world problem given the story I’m introducing.”

She was reporting on the devastating monsoons in Pakistan.

Nasser said during a recent TV interview that she could feel the fly “fluttering in the back of my throat” and that it “wasn’t going down — it was just stuck!”

Her clip had more than 100,000 views on Twitter by Saturday morning.

Sharing because we all need a laugh these days. Turns out it's not just @fordnation, I swallowed a fly on air today.

(Very much a first world problem given the story I'm introducing). pic.twitter.com/Qx5YyAeQed

In a separate interview, she said she saw the fly buzzing around ahead of the broadcast, but that her biggest concern was the insect potentially flying into the camera lens.

“The next thing I knew, it was in my throat,” Nasser said, noting that she tossed to a colleague earlier than planned because she could not make it through.

Saxon is a prolific writer with passion for the unusual. I believe the bizarre world is always exciting so keeping you up to date with such stories is my pleasure
Previous Tribute to Queen Elizabeth quickly taken down after UFC fans give loud boos when her picture was put on the main screen (video)
Next Viral Video: 3-legged alligator in Florida unexpectedly goes viral on TikTok