Caught On Camera, Tragedy As Indian Man, 2 Children Are Swept Away On Oman Beach (Video) 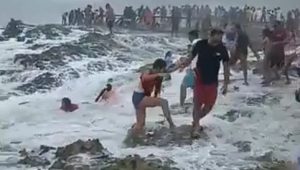 A man from Maharashtra and his six-year-old son drowned while playing at a beach in Oman today. The man’s nine-year-old daughter is missing and rescuers are searching for her, the local police said.

Shashikant Mhamane, 42, his wife and their children Shruti, 9, and Shreyas, 6, lived in Dubai. They were in neighbouring Oman on Sunday for a day-long trip, said Mhamane’s brother, news agency PTI reported.

A video of the incident taken by another tourist shows Shruti and Shreyas being swept away by a strong wave while playing in the water. Their father soon followed them into the water in a bid to save them, but he also drowned. 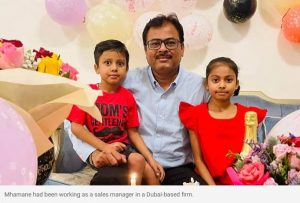 The bodies of the man and his son have been recovered. Rescuers are still searching for the 9-year-old girl.

Mhamane had been working as a sales manager in a Dubai-based firm.

Tehsildar Jeevan Bansode of the Maharashtra town where the family belonged told NDTV on phone that relatives have gone to Oman on receiving information about the tragedy.

Saxon is a prolific writer with passion for the unusual. I believe the bizarre world is always exciting so keeping you up to date with such stories is my pleasure
Previous Video: Sea Lion Almost Attacks Little Girl, Internet Slams “Content Hungry” Parents
Next Man jailed 3 months for biting off another man’s pinky finger