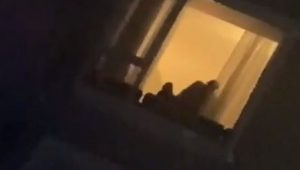 From the video it could be seen that this couple are not aware they were doing an open show for people outside. They were only getting intimate in their home unaware of the excited ‘cinema’ audience outside.

A yet-to-be identified couple caused a stir in their neighborhood for presenting a free view for people while having sex.

The public showed excitement over the show as they hailed the couple in loud voices during the lovemaking session.

Some of the passersby were heard shouting “e clear” while others also prayed the couple don’t fall into the nearby pool.

No one knows the exact location of the incident but it happened in Nigeria.

Saxon is a prolific writer with passion for the unusual. I believe the bizarre world is always exciting so keeping you up to date with such stories is my pleasure
Previous US Woman Vows Never to Swim Again After Encountering this Water Snake
Next Prostitutes force man who had no money to pay for s3x to wash their clothes (video)