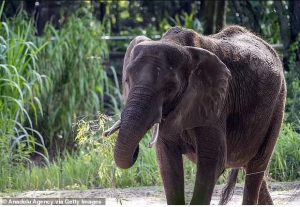 There was pandemonium in an Indian village after an elephant killed a 70-year-old woman and then returned to her funeral to trample her corpse.

The woman, Maya Murmu met her death when she went out to draw water in Raipal village, Eastern India where the escaped elephant came out of nowhere and trampled her on Thursday morning, June 9.

The elephant returned later in the evening as the elderly woman’s body lay on top of her funeral pyre.

It took her body down, trampled her again, threw her around, and went off into the night, according to the Press Trust of India.

The elephant is believed to have travelled from the Dalma Wildlife Sanctuary in the state of Jharkhand, 200km away from Raipal in Odisha state, Mayurbhanj district.

According to local reports, the Independent said, the second trampling happened while Ms. Murmu’s family were performing the last rites.

The sad incident did not stop the family the deceased from going ahead with the ceremony after the elephant left.

Saxon is a prolific writer with passion for the unusual. I believe the bizarre world is always exciting so keeping you up to date with such stories is my pleasure
Previous Nigerian Pastor shows up in church with a gun (video)
Next Hours after CCTV footage of man stealing IPhone 13 Pro-max went viral, his family calls shop owner to apologize and return stolen phone