Home / Africa / Female University Student Depressed As Her S3x Tape is Leaked by ex-boyfriend, She Apologizes to Family and Friends (Graphic Video)

Female University Student Depressed As Her S3x Tape is Leaked by ex-boyfriend, She Apologizes to Family and Friends (Graphic Video) 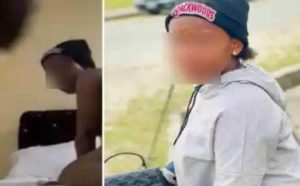 A female student of a University in Nigeria has apologized to the public after a sex tape she did with her boyfriend got leaked on social media.

The lady who is a student of Akwa Ibom State University was seen in the sex tape which went viral a few days ago.

Reports have it that her boyfriend allegedly leaked the video after both lovers broke up.

Both the girl and her boyfriend gave their consent before the video was recorded but she never knew it would be used against her.

The sex tape begins with the guy placing the recording device, believed to be a mobile phone, on a surface while the female student patiently waits, kneeling with four arms on a bed that is spread with white sheets.

This sex tape was leaked on Twitter by one @Favouritecoco. It was said to have been released by the boyfriend of the girl after they parted ways so it is claimed that leaking the tape was a revenge by the ex boyfriend against the girl.

The girl has recorded another video where she apologized to her family, friends and colleagues in school for the embarrassing act.

Looking visibly disturbed in a video she posted on social media to apologize for the leaked tape, the student disclosed that the 45-seconds long video happened a long time ago and she never believed it would haunt her now.

She added that she is going through a lot because of it now. The student said;

“Good day everybody, I am making this video to apologize to my friends, family, especially Akwa Ibom State University, my school. I am very sorry for the trending video about me, everywhere on social media. I am very sorry.

“This video happened a long time ago and I could not believe that it’ll com out now to hunt me. I am so so sorry. Please forgive me for everything. This video is far from me. currently, I am begging you all, please forgive me and save my life. Help me, because I am passing through a lot, because of all this, mentally and otherwise, thank you very much”

Watch her apology below;

It not yet known whether she recorded the apology video under pressure from anyone or group.

Saxon is a prolific writer with passion for the unusual. I believe the bizarre world is always exciting so keeping you up to date with such stories is my pleasure
Previous Top 10 News Presenters That Farted Loudly On Live TV, Including Fox News and BBC Staff (Video)
Next Desperate couple filmed nude having public intercourse on busy seaside cliff as shocked diners watch on (photos)