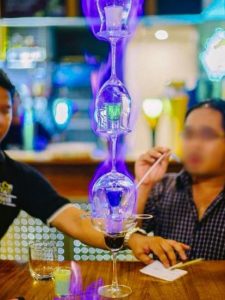 A woman in Hong Kong accidentally got her forehead burnt while drinking a Flaming Lamborghini in a bar in Central on Wednesday, June 15, according to local media reports.

HK01 quoted police as saying that the incident took place in the early hours of Wednesday in a bar situated in a building along D’Aguilar Street.

The 25-year-old woman was sent to Queen Mary Hospital for treatment.

The Chinese-language online portal said that the accident happened after she accidentally knocked over the Flaming Lamborghini while drinking it.

A Flaming Lamborghini is a cocktail containing mixed liquors that is set on fire and drunk with a straw.

Saxon is a prolific writer with passion for the unusual. I believe the bizarre world is always exciting so keeping you up to date with such stories is my pleasure
Previous Kneeling 12-year-old Hong Kong girl slapped in the face over 20 times by teens in bully video
Next Update: Groom filmed punching his bride when she beat him at a game during their wedding is charged with ‘petty hooliganism’