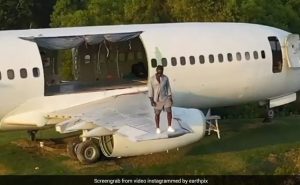 The Island of Bali in Indonesia is famous for beautiful scenery with lush green hills. It is also a very popular tourist destination, attracting many travelers and even divers.

A chilling video is making the rounds on social media showing an amazing stunt which is buzzing the internet and it involves a performance in the Island of Bali, Indonesia by a brave man.

The video was posted on a page on Instagram going by the name EarthPix.

The breathtaking shows a man identified as Koming Darmawan – a photographer in Bali – can be seen walking on the wing of a plane on top of a hill, which is suspended over a cliff.

According to the caption, the plane that is placed on the top of a hill will be converted into a tourist attraction for more people to come and visit.

The video has been captioned saying, “@koming.darmawan exploring this retired Boeing aircraft that’s been placed on a seaside cliff. It’s to be turned into a tourist accommodation near Nyang-Nyang beach in Uluwatu Badung Regency.”

Uluwatu is located in South Western Bali and it is extremely picturesque with rolling green hills accompanied by sandy white beaches.

While most users were awed by the natural beauty of Bali, many found Koming Darmawan walking on the wing to be anxiety inducing.

One user wrote, “Wheew the way my anxiety is set up”. Another wrote, “My knees went weak watching him go to the end”, while another just plainly said, “I swear if I was the one walking I’ll fall down directly”.

Saxon is a prolific writer with passion for the unusual. I believe the bizarre world is always exciting so keeping you up to date with such stories is my pleasure
Previous Watch As Puppy “Tricks” Child Into Dropping Her Lollipop and Steals It In Stylish Manner (Viral Video)
Next Car spotted carrying a huge container on highway (video)