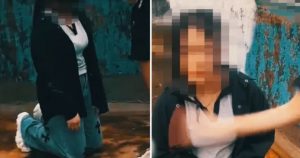 A horrific video going viral online which shows a 12-year-old girl kneeling and being repeatedly slapped in the face incited a citywide police search for her five assailants in Hong Kong.

The video shows the girl kneeling as a group of teenagers, aged 12 to 19, took turns slapping her across the face on the rooftop of a five-story building on Luen Yan Street in Tsuen Wan shortly before 5:30 p.m. on Saturday.

In the video, the victim, who is dressed in a white top, a black hoodie and blue jeans, does not attempt to avoid any of the 21 slaps she endures.

The teenagers speak in Mandarin and Cantonese throughout the filmed assault. The assailants were both male and female.

“Half the Hong Kong people hate [the victim],” one attacker can be heard saying.

“How dare she come back to Hong Kong,” another person says.

“Hit harder” can also be heard from one of the teenagers in the video.

The victim was taken to the Pok Oi Hospital to treat the injuries she sustained to her face during the attack.

The victim was suspected of leaving provocative messages online that had offended the 15-year-old girl, who is the first to slap the victim in the video. She is reportedly known as the “big sister” of a suspected juvenile gang in Tsuen Wan.

The Tsuen Wan criminal investigation unit has started searching for five Chinese girls in relation to the attack after the victim’s father reported the incident to the police on Sunday.

Five teens have since been arrested in connection to the incident, according to The Standard.

The incident is classified as an assault occasioning actual bodily harm. The offense is punishable by up to three years of imprisonment under the Offenses against the Person Ordinance.

Saxon is a prolific writer with passion for the unusual. I believe the bizarre world is always exciting so keeping you up to date with such stories is my pleasure
Previous Viral video: Gorilla Chases Wandering Stray Dog That Entered Enclosure At US Zoo
Next Hong Kong woman accidentally burns her forehead while drinking Flaming Lamborghini