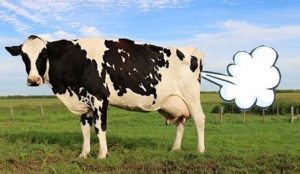 Farmers in New Zealand are about to set a record as the first to pay tax for livestock fart.

This follows plans by New Zealand to hand down a carbon tax to farmers in order to tackle one of the country’s biggest sources of greenhouse gasses: barnyard animals that fart and burp too much.

The price on agricultural emissions would make New Zealand the first country to make farmers pay for the gasses that their cows or sheep produce.

New Zealand is a huge agricultural exporter and it is home to five million people while having about 10 million cattle and 26 million sheep. This translates to a lot of burps and farts.

“There is no question that we need to cut the amount of methane we are putting into the atmosphere, and an effective emissions pricing system for agriculture will play a key part in how we achieve that,” New Zealand’s Climate Change Minister James Shaw said, as per Reuters.

Farmers can reduce the amount of burps and farts produced by their livestock by using feed additives.

Reports say proceeds from the new climate change plan will be directed into research, development, and advisory services to benefit the farmers that are forking out for the farts.

The ‘burp tax’ has generated controversy as some people say it is hilarious.

“In order to achieve their 2050 net zero promise – no matter what the world faces in terms of economic crisis, or the inability to keep their lights on – New Zealand has decided, ‘Too bad, time to put a price on that smelly methane’,” he said as per news.com.au.

He added: “Can you believe this stuff?”

It was gathered that cows and sheep fart is being taxed instead of other fart sources from horses, dogs, or people because cows and sheep have special, complex digestive systems with multi-chambered stomachs in order to digest their food.

What they eat ferments within their own body, according to the University of California’s Clarity and Leadership for Environmental Awareness and Research Centre.

But as that happens, they create methane as a byproduct – in other words, burps and farts.

Their fart is a type of greenhouse gas that traps heat in the atmosphere. It can be so intense that high-resolution satellites were once able to detect high methane emissions from a cattle lot in California, according to environmental data company GHGSat.

So, cow burps were essentially visible from space.

As for New Zealand’s proposal, it would be a major disruption to one of the nation’s biggest export markets.

A final decision on the scheme is expected in December 2022.

Saxon is a prolific writer with passion for the unusual. I believe the bizarre world is always exciting so keeping you up to date with such stories is my pleasure
Previous Police rescue 53-year-old Nigerian woman who was almost killed mob accused her of using ‘black magic’ to touch a baby that disappeared
Next Scientist Warns Men’s Penises Are Shrinking And It Could Have Big Effect On Mankind’s Survival