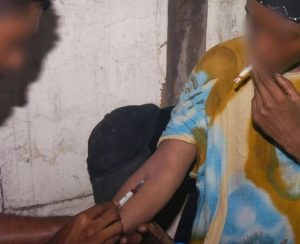 Not that they are vampires but the blood involved here I not actually ordinary because it is filled with hard drugs. So someone who can afford hard drugs, buys and sniffs it, then those who can’t afford it take the person’s blood and inject into their body and still feel high. What a shocking trend.

A new report has claimed that poor sex workers in Zimbabwe inject themselves with blood to get high.

The new trend known as flashblood or bluetoothing, requires a syringe full of blood being passed from someone who has just injected heroin to someone else who wants the drugged blood instead of heroin.

Young sex workers are taking drugs. When we ask them they usually don’t divulge that they use drugs but the evidence will be there. Some of the common drugs being taken by these youngsters include Gukka Makafela, Bronclear (Ngomwa) and Marijuana. We are also hearing that young sex workers are now injecting each other’s blood to get high. They take blood from an intoxicated peer and deliberately inject into themselves, we have been hearing of such cases of late and we are still investigating.

Another microplanner in Murambinda, Angela Matizanadzo said it was not unusual that sex workers in the district were drug users given the capricious sexual demands of their clients.

Saxon is a prolific writer with passion for the unusual. I believe the bizarre world is always exciting so keeping you up to date with such stories is my pleasure
Previous Man arrested for claiming he knows where people can sell their toes in Zimbabwe
Next Alligator Rips Off Chunk of Man’s Leg In Florida After he mistook it for a dog