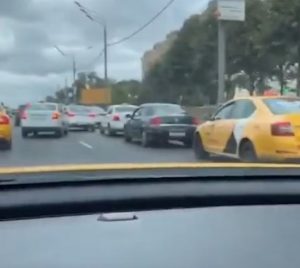 Hackers targeted a Russian taxi app by sending hundreds of drivers to the same address, causing huge traffic jams in the city of Moscow amid Ukraine invasion.

Yandex Taxi, a Russian app similar to Uber that allows users to order cabs to their location, was reported to have been targeted Thursday morning, September 1. The company later confirmed the incident in a statement.

‘On the morning of September 1, Yandex Taxi encountered an attempt by attackers to disrupt the service — several dozen drivers received bulk orders to the Fili region,’ the company said in a statement to Forbes.ru.

As a result of the hack, taxis flooded Moscow’s Kutuzovsky Prospekt – a major road that runs east to the west leading into the centre of the Russian capital.

The company said its security department ‘immediately stopped attempts to artificially’ order the taxis. However, this was not enough to stop the gridlock.

‘Drivers still spent about 40 minutes in traffic jams due to fake orders. The issue of compensation will be resolved in the near future,’ the company said.

No one has taken responsibility for the hack, but it comes as Vladimir Putin’s forces continue their invasion of Ukraine.

Saxon is a prolific writer with passion for the unusual. I believe the bizarre world is always exciting so keeping you up to date with such stories is my pleasure
Previous Police officers help woman deliver baby at gas station (video)
Next ‘Dead’ 3-year-old wakes up at her own funeral