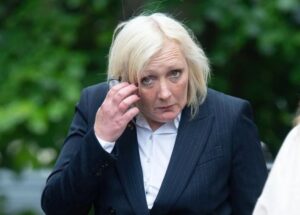 A middle-aged woman has been informed that she might end up in jail after she was caught pleasuring herself on a bench outside Waitrose supermarket in Cheshire.

Beverley Dean, 54, exposed her breasts as she committed the solo act in front of a pair of workers who saw her through their office window.

When police arrived on the scene in Northwich, Cheshire, they found a hoard of sex toys and lube in her handbag.

She cried as she admitted outraging public decency at 3.30pm on February 25 this year.

‘She had her mobile phone in her right hand and appeared to be filming herself or taking photos of herself performing the act.

‘She stopped to smoke a cigarette and then continued to suck on her fingers and placed them between her legs.

‘After she did this she stood up from the bench and both breasts were exposed. Her blouse was unbuttoned and her coat was hanging off her shoulders.

‘Officers were called and the defendant was arrested.

‘Her property was searched and an assortment of sex toys and lubricants were found in the defendant’s bag.’

Dean’s defence solicitor Shane O’Neill said it was her first offence and should be dealt with by the probation service.

He said: ‘We need to know what is happening within her life as she is getting to an age and committing this offence. There was some suggestion that she was filming herself. But when the police took her phone there was nothing on it.

‘She accepts responsibility for what she did.’

Magistrate James Fawson said: ‘Between now and your next court appearance, the things that need to happen are that you stay in regular contact with your legal representative and fully cooperate with the probation service.’

Dean’s next hearing is on August 12.

Saxon is a prolific writer with passion for the unusual. I believe the bizarre world is always exciting so keeping you up to date with such stories is my pleasure
Previous Horrifying footage shows steroid-abusing thug battering bulldog puppy in underwear
Next UK city estate terrified by gang of ‘machete-armed kids’ known as ‘Peaky Minors’