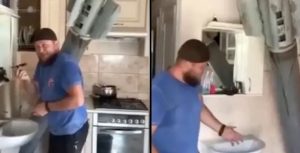 A shocking footage has surfaced online showing a Ukrainian man shaving his beard with a rocket embedded in his kitchen.

The footage which is going viral online shows the guy having a totally normal one despite the warhead just chilling in his home.

In the footage, uploaded to Reddit, the man shows off the hole in his ceiling where the undetonated rocket entered.

He doesn’t seem too fussed, but we would 100 per cent not be in that house if a missile came through the roof and didn’t go off.

One user said: “Bruh, I won’t go into my room if there’s a spider this man is shaving with a rocket.”

A second added: “Honestly, that would make a pretty awesome lamp once s**t calms down. Provided it doesn’t still have a live warhead attached.”

For many, the rocket wasn’t the big issue. Instead, they were asking why on Earth this man has what looks to be a bathroom sink and mirror in his kitchen.

One user said: “No one else is wondering why a bathroom sink and mirror is next to the kitchen stove?”

A second added: “I found this more confusing than the rocket.”

The good thing is that it seems like officials have stopped by his home to make sure everything is safe.

Saxon is a prolific writer with passion for the unusual. I believe the bizarre world is always exciting so keeping you up to date with such stories is my pleasure
Previous 17 people found dead in South African nightclub
Next Wife pays assassin $12 to kill her husband