Video: Police flog couple having s3x against a bin in the presence of shocked tourists 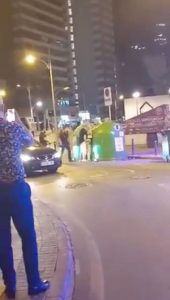 This video has caused outrage among many social media users though the people present were cheering the couple engaged in the obscene act.

A couple were interrupted by police after they were caught publicly having sex against a bin in Benidorm, Spain.

Everton fan, Kyle G who shared the video on Twitter, gave it the captioned: “Only in Benidorm.”

In the clip, which has now gone viral, a man is seen dressed in a black shirt and beige shorts as he stands behind a woman in a floral-patterned dress. 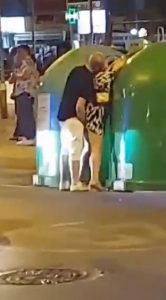 The woman, who was pressed up against a big, green plastic recycling bin had her back arched as the bloke’s hand moved back and forth under her skirt.

Passersby were heard cheering, “quick, come” and “come, baby, come” after they spotted police approaching to break up the public sex act.

An officer is seen hitting the pair in the back with a truncheon before others also surround them.

Vanko is a cheerful writer whose enthusiasm for unusual stories is inspiring.
Previous Nigerian man goes into shock after losing a virtual bet (video)
Next Teenager killed after jumping in front of moving truck for new internet challenge called ‘Angel of Death’