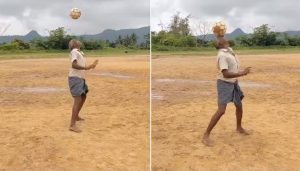 He is not new to the game of freestyle football kicks as he was an internet sensation during the 2018 FIFA World Cup buildups when he thrilled the social media with his skills.

Sixty-four-year-old James is showing that age cannot stop you from expressing your skills.

The truck driver is often photographed playing football like a young man. His videos too have been popular on the internet, with many calling him their inspiration.

A new video of James has gone viral on social media, which shows him juggling a football on his shoulders and head. The video has been shared by Pradeep on Instagram. He describes himself as a football freestyler.

“I had the privilege of meeting this 64 year old who still plays football. He drives a truck for a living and carries his Football kit with him in his lorry. He was part of the wayanad football team and is the only one who still plays the game. One thing I really learned from him is this- You love doing something? Just go do it,” Pradeep said while sharing the short clip.

It begins with the YouTuber showing his soccer skills, then passing the football to James, who picks it up like a pro and soon starts to play around with it. The 64-year-old kicks the ball and even balances it on his head, surprising Pradeep.

The video has been liked by more than five lakh people. Users called James a “legend”.

“Most of the uncles feel shy to express their talents because they feel, they I’ll be judged,” said a user.

“Age is just a no. Bro,” said another with fire emojis.

James became an internet sensation during the 2018 FIFA World Cup, when the videos of his freestyle football kicks became massively popular.

Saxon is a prolific writer with passion for the unusual. I believe the bizarre world is always exciting so keeping you up to date with such stories is my pleasure
Previous Plane turns back as pilot couldn’t land due to power outage at Nigerian airport (Video)
Next Cardiff man horrified to find his flat flooded with neighbour’s poo for a week due to blocked sewage pipe (Photos)