Watch: Cat Narrowly Survives An Attack By Coyote On Porch of US Beach House 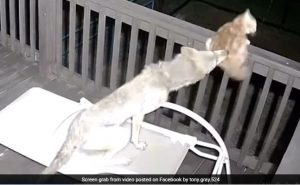 If not captured on camera this cat’s fearless survival moves wouldn’t have been appreciated.

A cat survived a frightening encounter with a coyote in a dramatic encounter that was caught on camera.

The hair-raising video was shared on Facebook by Tony Gary who owns a house in Texas, US, where the incident took place.

The video which has gone viral on social media shows a skinny coyote repeatedly charging and attempting to maul a cat on Mr Gary’s back porch in the middle of the night.

While one user said, “OMG! that was a close call.. that poor cat probably never felt such fear,” another wrote, “Did the cat survive or did the coyote kill him down on the ground??? This is so painful to watch!”

The video shows the coyote chasing the cat up onto a porch and aggressively attempts to bite it. Action continues as the cat hides under a deck, while the coyote remains undeterred and continues trying to get to the cat. A tug-war ensues between the two animals.

At one point, the kitty is seen desperately trying to climb onto a wooden railing, only to end up in the coyote’s jaws. But in a dramatic twist, the cat manages to free itself from the predator’s jaw and push it away with its front paws.

The coyote then again makes an attempt to take a bite out of the cat, but the feline quickly scrambles up a wooden porch column and out of harm’s way. In the end, the coyote is seen taking a few laps around the porch before recognising its defeat and scampering away. The terrified cat, on the other hand, was left hugging to the column for more than a minute before losing its grip and tumbling down.

“Someone almost lost a cat,” Mr Gray wrote on Facebook of the animal’s very close call. It is still unknown what eventually became of the cat and there has also been no word as to the identity of the cat’s owner or the feline’s location after it disappeared from the video.

Saxon is a prolific writer with passion for the unusual. I believe the bizarre world is always exciting so keeping you up to date with such stories is my pleasure
Previous Two men cling on a moving taxi in order to settle an issue with driver on highway (Video)
Next Controversial Video Shows Indian Cops Savagely Thrashing Men After Protest