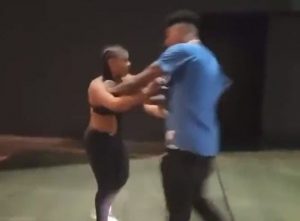 American rapper Blueface got onto a physical fight with girlfriend Chrisean Rock on the streets of Hollywood early Tuesday morning  August 2, and it’s all caught on video.

Singer Chrisean was seen following the rapper as he walks down the street and grabbing at his shirt, yanking him backward.

She pushes Blueface then smacks him across the face. 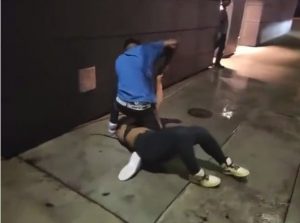 Blueface then hits her in the head, knocking her to the ground and ripping off the chain around her neck.

She then drags him by his shirt around the corner, where Blueface throws her against the wall and strikes her several times in the head and body.

Cops were called but by the time they arrived both Blueface and Chrisean were no longer at the scene.

Blueface and his girlfriend Chrisean Rock get into physical fight with each other on Hollywood Blvd.👀😳 pic.twitter.com/ZqpbDl9130

Saxon is a prolific writer with passion for the unusual. I believe the bizarre world is always exciting so keeping you up to date with such stories is my pleasure
Previous Tipper crushes father of 30 children to death in Nigeria
Next Teenager arrested for having sex with a goat