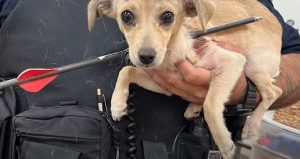 A four-month-old chihuahua puppy shot with an arrow nearly as long as its body is expected to survive after veterinarians removed the projectile from its neck.

According to Riverside County Animal Services, the unnamed dog was found wounded earlier this week in South Carolina, US.

A woman had seen the female puppy Monday morning in the 15500 block of Avenida Florencita in an unincorporated area of Desert Hot Springs.

She told a 911 Riverside County sheriff’s dispatcher that she found the puppy after being awakened by the sound of the injured dog “screaming,” said John Welsh, spokesperson for animal services.

The dog was picked up by a sheriff’s deputy who took her to Animal Services officer Matthew Perez at the intersection of Varner Road and Date Palm Drive. Perez then took the dog to Riverside County’s nearby Coachella Valley Animal Campus.

Registered veterinary technician Ivan Herrera sedated the dog and took some X-rays, which were reviewed by staff veterinarian Dr. Luis Lizarraga, who said the arrow did not strike the puppy’s vital arteries.

This happened today — and our team saved the dog’s life. Thank you so much to ⁦@RSO⁩ for major assistance! Terrible act! ⁦@RivCoNow⁩ #Chihuahua #veterinarycare #animalcruelty pic.twitter.com/04R5CLgnkU

Veterinary technician Emily Ellison assisted Herrera in the dog’s treatment and recovery, and commended Herrera on the safe removal of the arrow.

“It’s amazing to see her affection, despite what occurred. She is such a sweet puppy. I cannot imagine why anyone would do something so terrible to such an innocent creature. It’s very sick,” Ellison said.

“We are shocked and we hope someone can provide us any information as to who did this. Meanwhile, we’ll continue to treat this puppy and work on finding her a suitable home,” Gettis said.

(With reports from yahoo)

Saxon is a prolific writer with passion for the unusual. I believe the bizarre world is always exciting so keeping you up to date with such stories is my pleasure
Previous Watch: Spanish divers complete dramatic rescue of trapped whale (Video)
Next Watch Shelter dog’s reaction after realizing he’s been adopted, very amazing