Elderly Man Killed By Swarm Of Bees In India 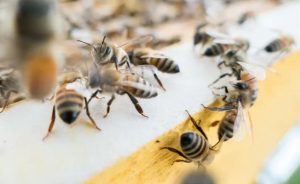 Tragedy stroke on Tuesday, in Jagtial district in Telangana, India, as an elderly person was killed and 10 others were injured after a swarm of bees attacked them.

Police said that about 20 families gathered on the outskirts of Rechpalli village under Sarangapur police limits to celebrate a traditional festival.

“While they were busy in the celebrations, suddenly a swarm of bees came out and bit some of them,” police inspector J Ramakrishna said.

Police said G Bheemaiah (80) of Rechpalli was killed in the attack by the bees and about 10 others were injured, police said.

The injured were shifted to Government Headquarters hospital at Jagtial, where their condition is said to be stable, police added.

Saxon is a prolific writer with passion for the unusual. I believe the bizarre world is always exciting so keeping you up to date with such stories is my pleasure
Previous Pakistani Baby Goat Born With 19-Inch Ears Aims For Guinness World Record
Next Canadian couple found dead ‘with throats slashed’ at Mexican beach resort