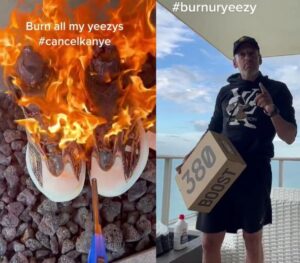 The man identified as Danny Shiff recorded a video of the burning and shared it online.

“Adidas has finally woken up and dropped Kanye West. So here I go burning my ninth pair,” said Shiff in a video that has gone viral on social media.

Shiff owns 45 pairs of the rapper’s sneakers. He said he bought them for his children and some for himself. And now, he won’t be wearing them anymore.

“I got upset. He made all these antisemitic remarks,” Shiff said. 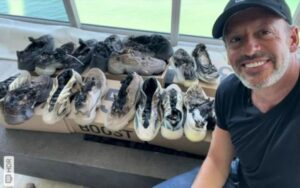 Shiff, who is from Israel, said the rapper has been spreading hate even long before these racial slurs were made towards Jewish people.

He said: “When someone with a platform as big as West, uses it to spread hate, it is unacceptable.”

Shiff said he will be donating triple the value of the shoe to charity.

“For every shoe I burn, two new shoes will go to charity. They will get new shoes or the money,” he said.

Watch a video of the burning below.

As the fallout continues from Kanye West’s racist and antisemitic comments, now some fans are turning on the rapper. Danny Shiff, from Miami, Florida, posted several videos on TikTok showing him burning his Yeezy collection. pic.twitter.com/3CHiWTcqOw

Saxon is a prolific writer with passion for the unusual. I believe the bizarre world is always exciting so keeping you up to date with such stories is my pleasure
Previous Teen gets four years imprisonment for stabbing intruder to death when he burst into his bedroom
Next Massachusetts woman unleashed swarm of bees on deputies serving eviction notice, police say