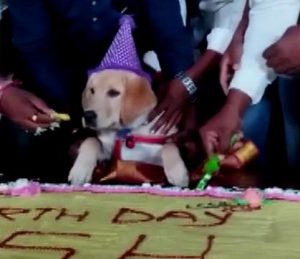 This is a way to show love for your special pet and receive praises from internet community for a job well done.

A man from Karanataka, India, is receiving praises online for his selfless love towards his pet dog, Krish.

Shivappa Yellappa Maradi recently organized what could be described as a grand celebration by all standards for his dog’s birthday in Belagavi, Karnataka, a state in southwest India.

The man wanted to make the event so memorable that he even ordered a 100kg cake for his pet dog to cut.

A video of this occasion has taken the internet by storm after it went viral.

The video shows a table with an enormous cake spread. Mr Shivappa is seen cutting a 100kg cake with his dog. Krish is seen standing in the middle of all the people in front of his cake with a cute purple birthday cap on his head.

The dog is seen being lifted and sported toward the cake by the guests and Mr Shivappa. The group is heard singing the happy birthday song while the person cutting the cake stood next to Krish. The cake was then fed to the adorable pooch.

According to ANI, around 4,000 people were fed on the occasion. On social media, the video has garnered sweet reactions. “Hahahaha Krish is so lucky,” wrote one user. “Supercute,” added another. A third user wrote, “Good, this should be a stereotype. Respect animals, they are also living beings and have feelings and emotions.”

Saxon is a prolific writer with passion for the unusual. I believe the bizarre world is always exciting so keeping you up to date with such stories is my pleasure
Previous Woman Dies As Tree Falls On Her Car While Driving In Chennai
Next Police officer opens fire on his wife, kills her in cold blood