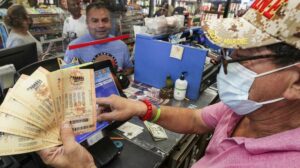 A person who has not yet been identified  has won $1.34bn (£1.11bn) in the second-largest Mega Millions prize in the U.S.

One lucky ticket purchased in the US state of Illinois on Friday, July 29, with a cash value option of $780.5m.

The winner can choose to take the cash outright or be paid the full jackpot in instalments over 29 years, the organizers say.

The odds of winning the jackpot in Friday’s draw were rather slim – one in 300 million, the Mega Millions website says.

The Mega Millions website says there was one winner, and company officials later confirmed that the ticket was sold in Illinois. No winner has yet come forward.

Saxon is a prolific writer with passion for the unusual. I believe the bizarre world is always exciting so keeping you up to date with such stories is my pleasure
Previous Man sues food stall for £200k because he ‘hasn’t stopped farting for five years’ after eating ham roll
Next Suspected Internet fraudster allegedly murders girlfriend in Nigeria, buries her in his room (video)