Home / Africa / Man confronts, slaps girlfriend in a hotel room where she allegedly lodged with his friend (video)

Man confronts, slaps girlfriend in a hotel room where she allegedly lodged with his friend (video) 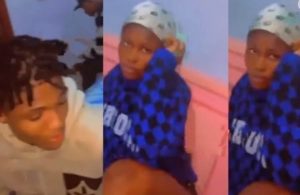 A young man has expressed his displeasure with his girlfriend after he caught her in a hotel room with his fried.

The young man recorded a video of the incident and uploaded on social media.

The video shows the lady left dumbfounded after being confronted by her boyfriend for allegedly lodging in the hotel room with his friend.

The man expressed how hurt he was by his girlfriend’s action, while also disclosing that he had done a lot for her.

He was heard in the video telling her that she had the mind to come and meet his friend in the hotel even after giving her money the previous day.

He gave the girl a soft slap and continued expressing his anger over her actions.

It was however unclear if he planned it all with his friend who was present in the room.

Saxon is a prolific writer with passion for the unusual. I believe the bizarre world is always exciting so keeping you up to date with such stories is my pleasure
Previous Cardiff man horrified to find his flat flooded with neighbour’s poo for a week due to blocked sewage pipe (Photos)
Next Woman horrified as she wakes up to man hovering over her bed demanding money and s3x