Mother gunned down while holding baby 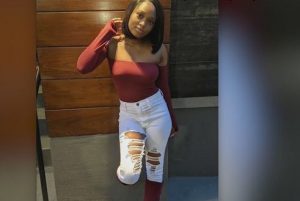 A 21-year-old mother has been gunned down as she was holding her baby and the shooter happens to be her baby’s father, her family says. The shooter was said to have pulled the trigger while wearing a jail ankle monitor.

The family said things were going well for 21-year-old Mic’keya Montgomery despite some setbacks.

Her mother died 10 months ago from COVID-19, but she had gotten a job and her own apartment.

According to Fox5, her family said the one thing she had not let go of was Taco Nash, her daughter Khole’s father. They said Mic’keya stayed with him out of fear.

It was gathered that when Mic’keya went to pick up the baby after work on Wednesday 15, Nash popped up with a gun, out of nowhere and Daycare workers tried to intervene but this was to no avail.

“She was saying, ‘No,’ you know and asking for help, yelling out for help and he got into a physical altercation with them (daycare workers) and threaten to kill everybody and so they ended up just having to let… her you know go with him,” said Chancierra Coleman, the victim’s sister.

The family said police told them the 21-year-old mother ran to a wooded area behind the daycare trying to get away. As she clutched her baby, she was shot and killed.

“She had been holding her because there was blood splatter all over Khloe. She was covered in… covered in blood,” Coleman said.

Police arrived minutes later and Nash surrendered. Police have told the family the entire chase and shooting was caught on surveillance video.

The family said Nash shot Mic’keya in Atlanta two years ago. They claim he physically beat her up in March 2020. They also said she had called police on two other occasions, all domestic related.

They say all four times, he was granted bond after police charged him.

The deceased’s family called this a classic case of the judicial system failing a victim.

Saxon is a prolific writer with passion for the unusual. I believe the bizarre world is always exciting so keeping you up to date with such stories is my pleasure
Previous Man jilted by lover commits suicide
Next Monkey in custom-made bulletproof vest found dead after bloody cartel shootout