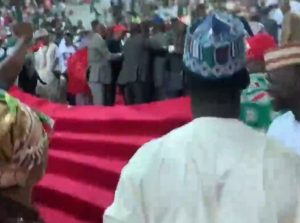 The incident involved one of the major political parties in Nigeria, the Peoples Democratic Party (PDP). They had their presidential primaries election on Saturday, May 28 and as one of some of the aspirants climbed the podium the staircase leading to the podium collapsed.

What an embarrassing moment.

The incident was captured in a video which has gone viral.

This happened while one of aspirants, Nyesom Wike, was making his way to the podium. He later lost the election.

No one was hurt.

Saxon is a prolific writer with passion for the unusual. I believe the bizarre world is always exciting so keeping you up to date with such stories is my pleasure
Previous Missouri woman arrested after dogs die from being left in car while she ate lunch in Florida
Next Lady apprehended after her husband’s corpse was found in their bathroom three days after his death (video)