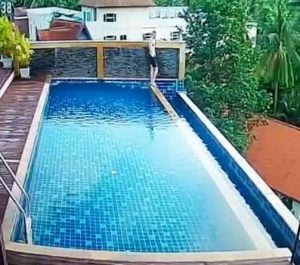 Tragedy struck in Phuket, Thailand as a teen tourist tragically fell 50ft to his death after he slipped while trying to balance on the side of a swimming pool.

Joshua James Connell, 19, tragically fell six floors down from the hotel roof on Thursday, June 30, while he was holidaying in Thailand.

He was last seen on CCTV as he walked along a wall at the side of the pool at the Paripas Patong Resort in Phuket on June 30.

The harrowing footage showed him throwing his hands in the air as he tip-toed onto a slim white rail while balancing. When he reached the end of the rail, he slipped and fell.

Shocked locals found Joshua dead on a tin roof of a cafe below the hotel at around 5.45pm local time.

Joshua, from Australia’s capital Canberra, was rushed to hospital but pronounced dead shortly after due to the severe injuries suffered in the fall.

Local resident Ning Tanyaporn was preparing to open a street restaurant across the road from the fall and said: ‘”I had just opened my shop and I heard a loud thunder sound.

“I thought a car had crashed or there was an explosion in their kitchen.

“People gathered around the restaurant and saw the foreign man on the roof. He was unconscious so someone called an ambulance. Everyone was shocked that he fell down and died.”

Police Lieutenant Colonel Kokiat Boonplod said officers received the emergency call about a foreign man who had fallen from a hotel.

Police Lieutenant Colonel Kokiat, who is leading the investigation, said: “The deceased fell from the hotel adjacent to the restaurant, wearing shorts and without a shirt.

“The roof of the restaurant hut was shattered and several tiles were on the floor.”

The policeman said officers had reviewed CCTV from the hotel and do not believe anybody else was involved in the death.

Saxon is a prolific writer with passion for the unusual. I believe the bizarre world is always exciting so keeping you up to date with such stories is my pleasure
Previous Watch: Man Calmly Plays Golf As Alligator Approaches From Behind
Next School Boy’s Incredible Magic Trick Stuns Internet (Video)