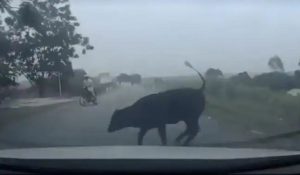 The cow actually survived the big hit but at first it looked impossible for any animal to come out alive after such accident.

A car driver in Vietnam has gone viral for hitting a cow that came on the road at a wrong time. The video of the incident is now going viral.

It was posted on YouTube by ViralHog. The footage shows the dashcam view from a car driving on an empty road. Suddenly, a cow appears on the right side, trying to cross the road. The driver tries hard to avoid a collision, even screeching to a halt, but the vehicle rams into the cow head-on.

After the car hits the cow, it flies into the air, landing on a two-wheeler passing by. The two-wheeler rider also falls to the ground, but surprisingly, the cow gets up and runs away.

The video has been shared with a caption, “Cow Crosses Road at Wrong Time.”

The good news is that both the cow and the two-wheeler driver survived the incident.

Saxon is a prolific writer with passion for the unusual. I believe the bizarre world is always exciting so keeping you up to date with such stories is my pleasure
Previous Texas man on the run after shooting wife, killing her grandmother before fleeing with 3-month-old son
Next Watch: Two Cars Collide Head-On At Intersection Sparking Fire (Viral video)