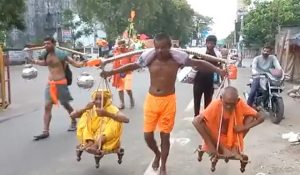 A video has surfaced online showing a man carrying his old parents on his shoulders during the Kanwar Yatra.

The annual Kanwar Yatra commenced on July 14 and it will end on July 26. During this time, lakhs of Lord Shiva devotees travel to Hindu pilgrimage places of Haridwar, Gaumukh and Gangotri in Uttarakhand, and Sultanganj in Bihar, to fetch the holy waters of River Ganga.

Yearly, photos and videos of the devotees travelling barefoot with heavy loads surface on social media.

This year a video which has gone viral shows a man carrying his old parents on a scale. He replaced the scale’s containers with small chairs and carried his mother and father on his shoulders.

“Nowadays, old parents are despised, they are thrown out of the house or not allowed to live with their children. Whereas, today the opposite view was seen. There is a Shravan Kumar among lakhs of Shiva devotees who have come on a Kanwar Yatra with his elderly parents in a palanquin. My respects!” read IPS Kumar’s caption, when translated into English.

Since being shared, the video has taken the internet by storm. It has garnered thousands of views and hundreds of likes. Internet users praised the man’s act and showered him with complement in the comments section.

One user wrote, “Hats off !!! even the son carrying them look aged…Great resolve and will power.” Another added, “Dhanya ho aap aaj ke samay me aisa drshya kha milega.” others simply flooded the comment section with heart and flower emojis.

Saxon is a prolific writer with passion for the unusual. I believe the bizarre world is always exciting so keeping you up to date with such stories is my pleasure
Previous Mother and her lover who laughed as they filmed themselves torturing her son to death with wood, cable & needle found guilty of his murder
Next Man Catches Two-Year-Old Girl After She Falls From Fifth Floor Window In China (video)