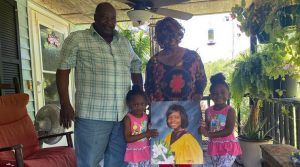 A woman in Hancock County has died after she allegedly escaped out of the deputy’s cruiser while it was moving.

Between Thursday, July 14 and Friday, July 15, Brianna Grier came home and was having a schizophrenic episode.

Her mom Mary Grier called the Hancock County Sheriff’s Office for help. Two deputies arrived at the home between 12 and 1 a.m. and put the 28-year-old in handcuffs and put her in the back of the deputy’s car, reports 11alive.

She was supposed to be taken to the sheriff’s office but ended up somewhere else. Her father Marvin Grier says he just wants to know the truth.

“I would do what any other parent would do, and that’s what we’re trying to do is find answers,” Marvin Grier said.

Mary and Marvin Grier were shocked after they got a visit from Hancock County Sheriff Terrell Primus who told them Brianna was airlifted to Grady Hospital in Atlanta with a head injury.

“If I had known it was going to turn out like this, God knows I wouldn’t have called to come and get her,” Mary Grier said.

The Griers were told by the sheriff that Brianna had kicked her way out the deputy’s cruiser. Brianna died on Wednesday just after 12:30 p.m., according to her family.

Brianna had two fractures in her skull. Mary Grier couldn’t believe the condition she was in when she saw Brianna in the hospital bed.

Special agent Mary Chandler with the Georgia Bureau of Investigation confirmed the Hancock County sheriff requested their assistance in the investigation. Chandler confirmed while Brianna was being transported, she came out of the moving car. Mary Grier is having a hard time believing the story she was told.

“If she got out the car, they had to let her out the car. That’s my interpretation, because in a police car, you can’t open the door from the inside, it had to be the outside,” Mary Grier said.

Marvin Grier says this isn’t the first time Brianna has had a schizophrenic episode. He says usually EMS would come, transport her to Atrium Health Navicent Baldwin and take her to the psychiatric unit, but this time was different. Mary Grier said she’s upset with how the situation was handled.

Brianna has 3-year-old twin girls, Maria and Mariah. Marvin Grier told 13WMAZ that Brianna had dreamed of being a veterinarian. The only answer the family wants to know is what happened to their Brianna.

Saxon is a prolific writer with passion for the unusual. I believe the bizarre world is always exciting so keeping you up to date with such stories is my pleasure
Previous Bizarre new trend shows young people now ‘addicted to getting high on condoms’, see how
Next Police arrest student who stabbed her boyfriend to death for allegedly cheating