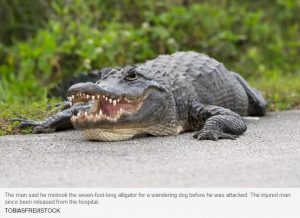 A man who mistook a giant alligator for a dog has lost a huge chunk of his leg when he was attacked by the reptile outside a Florida hotel.

Police said the man was walking outside the Warm Mineral Springs Motel in North Port around 12:30 a.m. Tuesday, June 7, when he noticed a dark figure shuffling around in some bushes.

He though it was a dog attached to a long leash so he didn’t bother to move out of the way when the gator charged toward him. 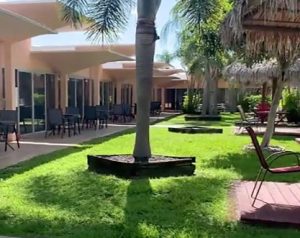 What happened next was horrific. The alligator bit his leg and ripped off a piece of his muscle tissue, deputies said.

A deputy who was out on a separate call in the area responded to the scene. The man was taken by paramedics to the Sarasota Memorial Hospital with non-life-threatening injuries, according to WWSB.

While waiting for an animal trapper to respond to the scene, another deputy was able to capture the alligator and removed it from the area.

The Florida Fish and Wildlife Conservation Commission is investigating the attack.

Saxon is a prolific writer with passion for the unusual. I believe the bizarre world is always exciting so keeping you up to date with such stories is my pleasure
Previous Poor sex workers in Zimbabwe now inject themselves with blood to get high
Next Cow arrested for killing 12-year-old boy in South Sudan