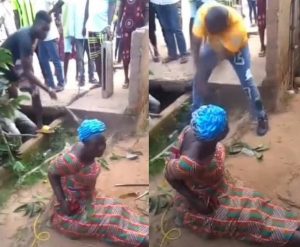 A video has surfaced online showing the moment a group up villagers in Abia State, Nigeria, tied and flogged a widow accused of witchcraft.

The video shows the widow being tied and flogged by members of her community in Umueghu in  Amaegbuato autonomous community Nkpa Bende Local Government, Abia state, Southeast Nigeria.

Activist, Harrison Gwamnishu, who shared a video, said the widow was assaulted after her late husband’s brother’s wife accused her of being a witch.

”When I talk about widows protection, I’m not asking for too much. Our mothers suffer the most from child delivery.
Mrs. Amarachi Okechi, a widow was accused of witchcraft by her late husband brother’s wife.
If you are from Umueghu in Amaegbuato autonomous community Nkpa Bende Local Government, Abia state, your community did this to this woman.
Even when the woman was begging and telling them she’s innocent, they tied her hand to her back, tied her two legs, flogged and filmed her.
Her children reached out to the Behind Bars and we have decided to take this matter up no matter what it will cost us.
This is barbaric and should be condemned by all.
#Attention: Please help us tag the wife of Abia State Governor.”

Saxon is a prolific writer with passion for the unusual. I believe the bizarre world is always exciting so keeping you up to date with such stories is my pleasure
Previous Internet celebrity bodybuilder ‘Iranian Hulk’ deletes his social media photos after humiliating boxing loss where he looked smaller and weaker (Video)
Next Groom-to-be killed by lightning strike while posing for engagement photoshoot with his fiancée (photos)