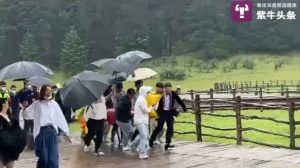 A groom-to-be has been struck dead by lightning while posing for engagement photos with his fiancée in a popular tourist spot in China.

The man identified as Ruan, was hit by a lightning bolt during a wedding photoshoot with his fiancée at the Spruce Meadow, a popular scenic spot. He was rushed to hospital where he was pronounced dead, South China Morning Post reported. 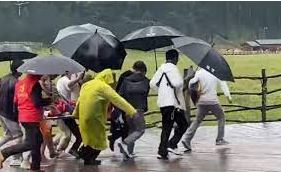 Before the lightning struck, Chinese authorities reportedly issued a yellow weather warning, the third highest in the country’s weather system.

Despite the thunderstorm, the couple decided to go ahead with their planned photoshoot.

Pictures showed the rescue crew carrying the man on a stretcher in heavy rain.

Saxon is a prolific writer with passion for the unusual. I believe the bizarre world is always exciting so keeping you up to date with such stories is my pleasure
Previous Community members tie and flog widow after her late husband’s brother’s wife accused her of being a witch (video)
Next Chinese man who murdered Vloger ex-wife by setting her on fire as she live-streamed to horrified audience executed