Dramatic Video: Sheriff Performs CPR on Child in the Middle of Traffic 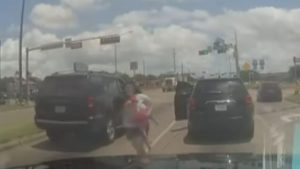 In case you missed this video it is one intriguing package that shows how well trained officers save life.

This is a viral video which shows the moment a Texas family nearly lost their toddler but a sheriff’s deputy stepped in to avert tragedy.

A woman identified as Daniella Armijo stopped her car in the middle of traffic when she noticed her 4-year-old was in need of help.

Armijo grabbed her daughter and ran towards the sheriff’s vehicle behind her.

Officer K. Rose was the deputy in the car behind the distressed mother.

He began doing CPR on the limp little girl, “patting the child on her back to clear any possible obstructions and doing chest compressions.”

The video which was posted on YouTube by Inside Edition has since gone viral.

Mother and daughter were taken to a nearby clinic after the successful CPR, according to the video.

The Texas family is ever grateful to Officer Rose for this timely intervention.

Saxon is a prolific writer with passion for the unusual. I believe the bizarre world is always exciting so keeping you up to date with such stories is my pleasure
Previous Man Makes Hilarious Job Application Blunder By Sending Photo Of Dog Instead Of Resume
Next Babysitter Beats, Tortures 2-Year-Old Child in Parents’ Absence (Watch Video)