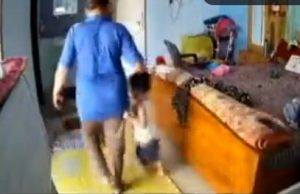 Police in Madhya Pradesh, India, have arrested a 30-year-old babysitter after video went viral showing her beating and torturing a child.

The shocking video that has gone viral on social media shows the babysitter beating and torturing the two-year-old child in a house in Madhya Pradesh.

Reports say the incident took place in Jabalpur when the child’s parents were not at home.

The parents of the child were said to have lodged complaint with the police following which the babysitter identified as Rajni Chaudhry arrested.

Saxon is a prolific writer with passion for the unusual. I believe the bizarre world is always exciting so keeping you up to date with such stories is my pleasure
Previous Dramatic Video: Sheriff Performs CPR on Child in the Middle of Traffic
Next Man commits suicide after raping neighbor’s 16-year-old daughter