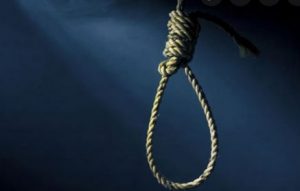 A Nigerian man has committed suicide after being accused of raping his neighbor’s daughter.

The man identified only as Kayode, has committed suicide after his neighbour’s daughter accused him of raping her twice at their house in the Oja-Amukoko area of Lagos State, Nigeria.

It was gathered that the victim’s mother, who had a stroke, was taken to the Ikorodu area for treatment.

The deceased was put in care of the 16-year-old at home. He reportedly took advantage of her while he was looking after the girl since her mother was down with a stroke in the hospital.

Her father said she accused Kayode of raping her twice, adding that he also seized her phone to prevent her from informing her family members, reports PUNCH METRO.

He said, “My daughter stays with her mother, as both of us are no longer together. My ex-wife had been suffering from a stroke and from what we gathered, she had a neighbour, Kayode, who had been assisting to take care of her.

“But when my ex-wife’s sickness worsened, she was taken to Ikorodu for treatment and her daughter also followed her. As time went on, the neighbour had to go there to bring my daughter back to her mother’s house around Campus, Amukoko, so she could continue schooling.

“But she suddenly left her mother’s place and came to my place on Ojo Road. She said she wanted to continue staying with me till her mother recovered. About 20 minutes after she came, Kayode also came to my place and started saying he knew my daughter’s behaviour better than I did.

“He said if she was no longer staying at her mother’s house, he would have to return her to her mother in Ikorodu since he was the one who brought her home. He also said she came to stay at my place because she wanted freedom to go out and that he never had any agreement with her mother that she would be staying with me.”

After speaking with his ex-wife, the victim’s father said Kayode took his daughter back home but a few days later, he received a call from his ex-wife’s younger brother, who told him to go home to rescue his daughter.

He said, “I quickly rushed there, but I didn’t meet her at home. I called my ex-wife’s younger brother and he said he would soon join me at the place.

“After a few minutes, I saw my daughter and she informed me that Kayode raped her. She said she could not sleep alone in her mother’s apartment and that when she slept at Kayode’s apartment, he raped her twice and seized her phone.

“It was when she told Kayode that she wanted to contact her mum that he released his phone to her and instead of calling her mum, she used that opportunity to text her mum’s younger brother.

“So, we went to a police station and she explained to the policemen who said they could not hear only our side of the story. We went to pick up Kayode, but didn’t meet him at home. The policemen then directed us to do a medical test at Orege General Hospital. We were also asked to return the next day as they searched for him.

“The next day, I received a call that Kayode drank insecticide and died. They found him in the backyard of their house and rushed him to a hospital, where he was confirmed dead.”

He said, “The father of the girl, 16, reported that his wife’s co-tenant, Kayode, 41, defiled his daughter. After the report was made, policemen were detailed to arrest the suspect, but he was not seen.

“The investigation was ongoing when the suspect’s brother came to the station to report that Kayode committed suicide by drinking a substance suspected to be insecticide. The corpse was recovered but later released to the family for burial in accordance with Islamic rites.”

He said, “Some people consider suicide to be a way out of facing shame and embarrassment. His death via suicide is unlikely to give solace to the young girl and her family, as it may not provide closure for them.

“But on the other hand, his actions may also be viewed as showing remorse and a form of atonement. The best approach is to ensure that the law takes its course.”

A man, identified only as Damilare, was on Tuesday arraigned before Justice R. A. Oshodi of the Lagos State High Court sitting at Ikeja for allegedly raping a minor.

The 16-year-old, who was aged 14 at the time of the incident, said Damilare met her on her way to a salon and promised to give her money and buy her a phone.

“I said my parents would complain. He then asked to take me to his house, but I said no because my parents sent me to go and have a haircut,” she added.

During cross-examination by the defence counsel, she explained that the defendant dragged her into his house, took off her pants and raped her, adding that when she screamed, he used his hand to cover her mouth.

She said, “He pushed me on the bed, removed my pants and raped me. When I screamed for help, he used his hand to cover my mouth.”

The 16-year-old said she noticed that she was bleeding after the attack.

The case was adjourned till October 26, 2022, for further hearing.

Saxon is a prolific writer with passion for the unusual. I believe the bizarre world is always exciting so keeping you up to date with such stories is my pleasure
Previous Babysitter Beats, Tortures 2-Year-Old Child in Parents’ Absence (Watch Video)
Next Nigerian man and his American lover under drug influence walk in the street naked, attempt suicide saying they will “die and rise on the third day” (Video)